The Rosen collection contains a selection of English-language veterinary medicine journals published variously in Britain, the United States, and Canada. These early professional journals were established and sustained by the financial contributions and hard work of far-sighted and committed veterinary educators/practitioners. Veterinary journals continue to play a crucial role in the development of the profession by providing a vehicle for communication among clinicians, students, practitioners, governments and the public. Suppliers' journals are a subset of veterinary journals found in the Rosen collection for the purposes of marketing products and services. Some of these journals mimic scientific journals although the focus of their research articles is limited to applications of the company's products. For example, Norden News publishes research articles about its line of veterinary vaccines. Other suppliers' journals are aimed at the lay reader; the client found in the veterinary practice waiting room, or on the farm.

By the late18th century, veterinary education was seen as an effective means of advancing veterinary medicine as a profession. Veterinary schools, first in Europe and later in North America, were being established and refined although many hurdles appeared on their path. Scientific journals in a variety of disciplines were finding a purpose as the primary means for scholars to communicate professionally with each other. Veterinary medicine developed its own journals that were used to disseminate the clinical information and theory needed by students, as well as by graduates in their own practices. In addition, journals provided a platform to communicate with members about organizing professionally, and to promote the status of the profession among governments and the public. Editors and contributors, alike, used veterinary journals as tools of persuasion. Among the setbacks to establishing viable veterinary medicine journals were disinterested potential subscribers, difficulties sustaining the publications financially, and finding content to interest readers. Several journals that are not found in the Rosen collection have been included in the discussion because the journal founders, editors, or contributors have authored books that are present in the collection.

The Veterinarian was established in 1828 by founding editor William Percivall (1792-1854) who was joined later that year by William Youatt. The co-editors had different styles - Percivall wrote for a professional audience while Youatt wrote in a more popular style. Percivall left the journal after its first year and returned in 1847 when Youatt died. Percivall and Youatt had no qualms about using their influential journal as an editorial vehicle to share their opinions with peers, politicians and other interested readers. According to Jones (2015, p. 352), “By its editorials it disseminated the aspirations of the young profession.” Percivall and Youatt were especially vocal in their opposition to the direction in which Superintendent Edward Coleman was taking the London Veterinary School. Youatt was one of the voices calling for educational reform of his profession, "It was in The Veterinarian that the [veterinary education] reform programme was set out most comprehensively" (Fisher, 1993, p. 288). After Percivall’s death in 1854, The Veterinarian was purchased by Professors Morton and Simmonds of the Royal Veterinary College (the London school). "There was no break in publication, and the style and format were unchanged" (Pattison, 1990, p. 71). Simmonds was associated with the journal until 1894. Abstracts of the Proceedings of the Veterinary Medical Association was a monthly supplement to The Veterinarian from 1837-1841 and was replaced by the supplement, Transactions from 1841-1850.

“By its editorials it [ The Veterinarian ] disseminated the aspirations of the young profession.” Jones (2015, p. 352).

The Farrier and Naturalist was introduced during the same year as The Veterinarian by Veterinary Surgeons Bracy Clark and F.C. Cherry. The journal had the broad mandate to investigate the breeding and rearing of domestic animals as well as the natural history of species from other countries. There was to be a focus on discussion of diseases of horses and translation of reports and essays from foreign veterinary journals. The Farrier and Naturalist was published in two volumes (1828 and 1829), and continued in 1830, volume 3, as The Hippiatrist with a focus on equine veterinary medicine.

In 1902 The Veterinarian merged with The Journal of Comparative Pathology and Therapeutics, the latter a quarterly journal founded by John McFadyean in 1888. McFadyean argued with George Fleming editor of The Veterinary Journal in an effort to maintain editorial control of his own journal. According to Jones (2015, p. 365), McFadyean made the journal - his journal – he was editor, abstractor, translator, reporter and reviewer. From its inception The Journal of Comparative Pathology and Therapeutics has been a respected publication of high quality that is still publishing today.

The Edinburgh Veterinary Review was a short-lived journal (founded in 1858 and ceased in 1864) with a very narrow mandate. It was published by John Gamgee as a vehicle for communicating his views on infectious diseases in cattle and his recommendations to reduce transmission by reducing the free trade of cattle into Britain.

The Veterinary Journal was a monthly publication founded in 1875 by George Fleming who was a veterinary inspector to the British War Office. He became head of the Royal College of Veterinary Surgeons (RCVS) and pursued professional recognition for the association until 1881 when the Veterinary Surgical Act was passed. He was also a prolific author best known for his writings on animal plagues. According to Jones (2015, p. 361), “Fleming started his periodical because he was a forward looking, modern man and he knew that education was all important to the advancement of the profession.” The Veterinary Journal still publishes today.

“Fleming started his periodical because he was a forward looking, modern man and he knew that education was all important to the advancement of the profession.”

The Rosen collection contains two volumes (1952-1953) of The Quarterly Abstracts of the Ontario Veterinary College, which no longer publishes. And issues of Torontonensis : the year book of the graduates of the University of Toronto published by the Joint Executive of the Students' Administrative Council, 1898-.

The Journal of the Royal Army Veterinary Corps was established in 1929 by veterinary surgeons J.H. Steel and F. Smith (1857-1929). The Army Veterinary Service was created in 1796 and had its own publication called The Quarterly Journal of Veterinary Science in India and Army Management from 1882 to 1890. Potential subscribers, the majority of whom were active or retired veterinary officers, determined the journal’s content. Thus, the journal became a forum for original observations and experiences of those officers as well as contributions to scientific literature. Other subscribers included civil research workers who would be interested in scientific papers; cavalry officers would look for applications of veterinary science to horse management; and ex-Corps personnel for news and notes. The first issue, 1929, in the Rosen collection contains the following sections: editorial, clinical articles, sport, garrison news, reports from Royal (Dick) and ex-Corps men, personal, births, deaths and marriages.

AVW Bulletin was a quarterly published by the Association for Women Veterinarians in Madison, WI. The Rosen collection has volume 41(1), 1986. 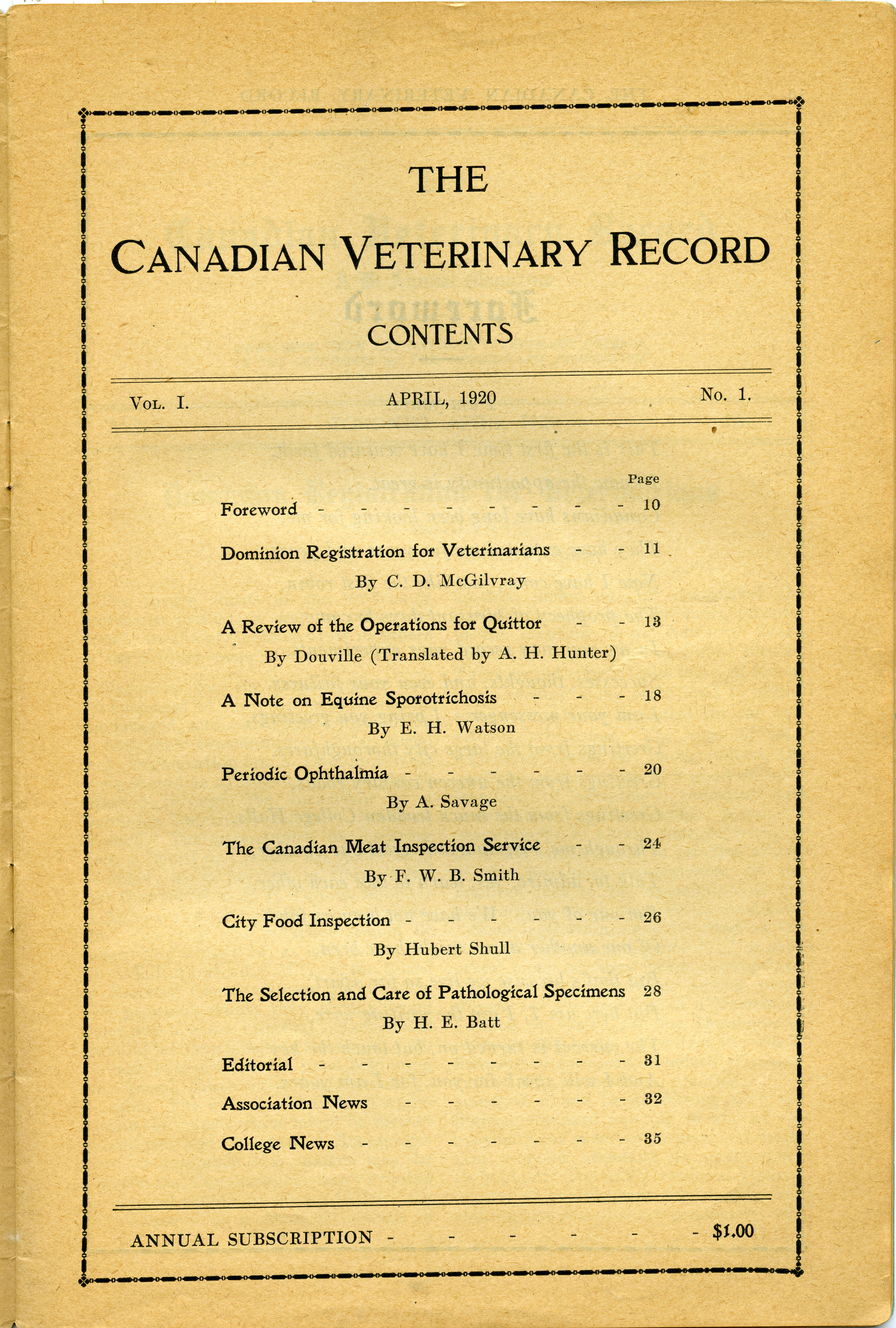 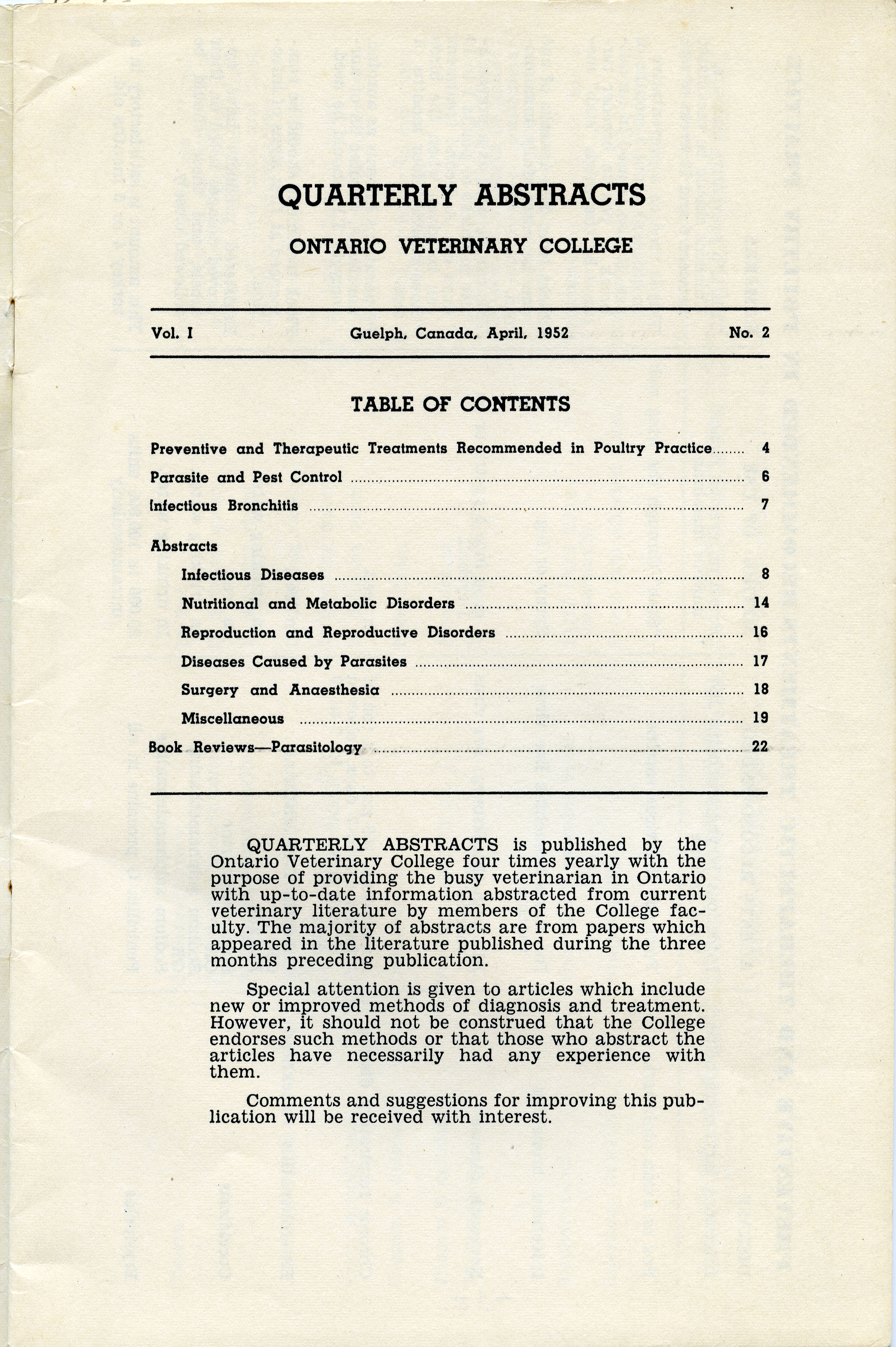 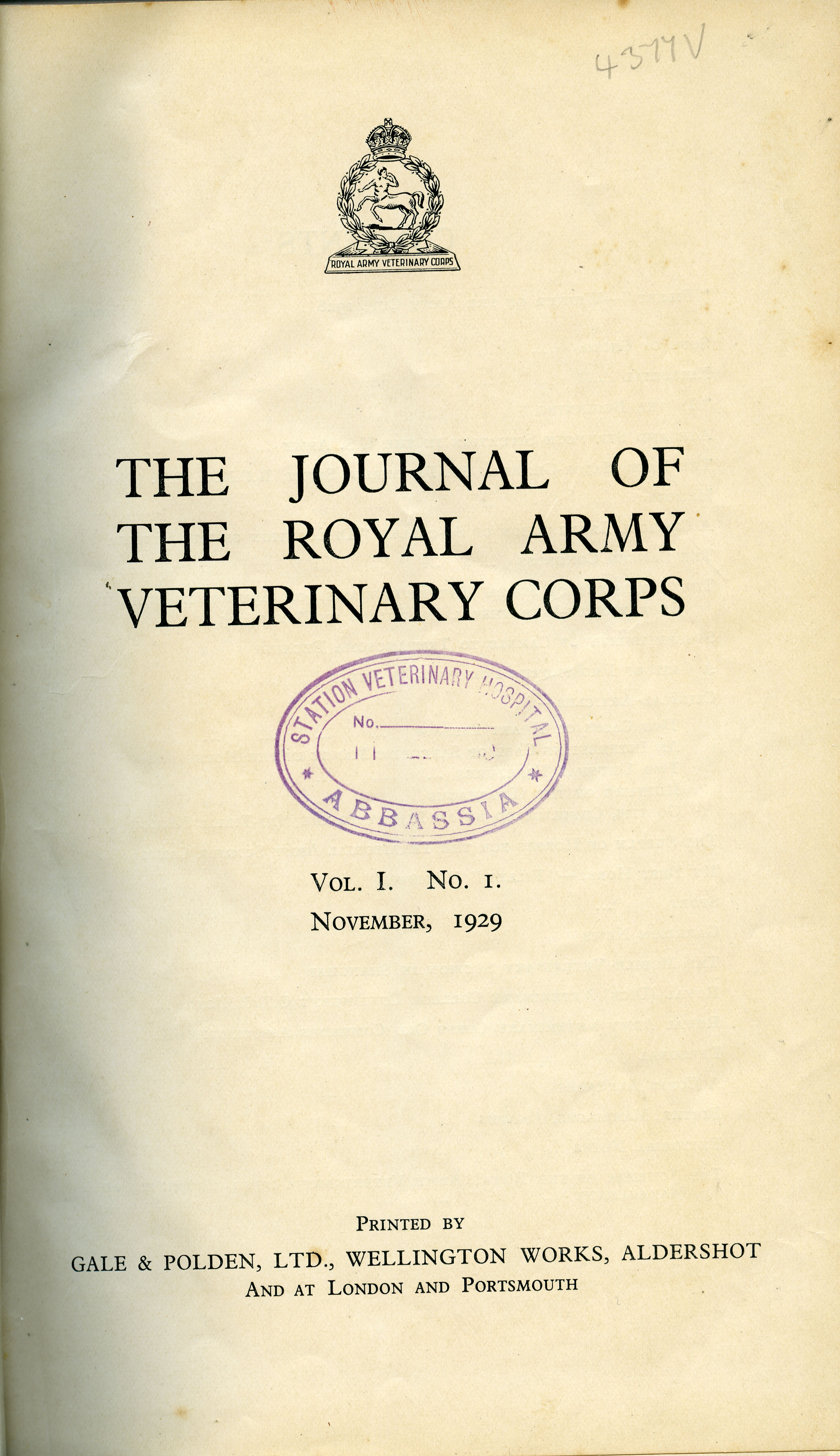