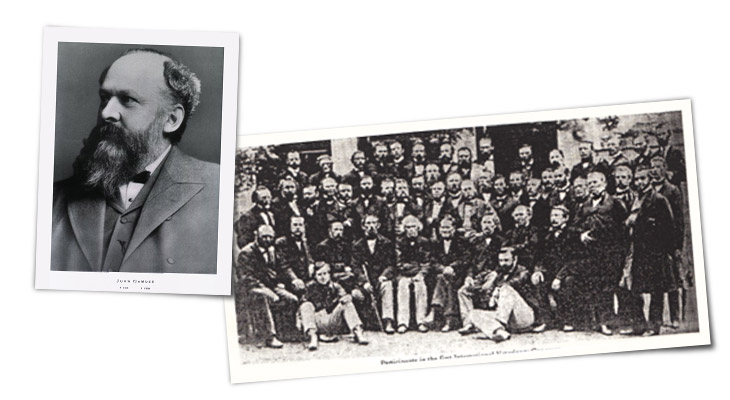 John Gamgee (1831-1894) was another multifaceted veterinarian - he was a veterinary researcher, veterinary educator, and science writer/publisher. He left a lasting legacy in the management of epizootic diseases as a veterinary expert and as a public health communicator. "John Gamgee was unquestionably the best-educated and most brilliant figure in British veterinary history to the late nineteenth century. His knowledge of disease pathology and his clinical experience were far superior to any of his contemporaries" (Fisher, 1991, p. 297).

He qualified at the London school in 1852. After graduation he spent two years in Europe studying cattle plagues and how other European countries were attempting to control infectious diseases in livestock. Gamgee concluded that lack of protective measures and the practice of importing potentially infected animals meant that Britain was vulnerable to cattle plagues. Although cattle plagues had afflicted the island nation previously, a virulent strain originating in eastern Europe appeared in Britain in 1865 with disastrous economic and public health impacts. Gamgee had a strict regime in mind for managing cattle plagues although the cause and treatment were unknown at the time; he was the lone voice of protest. “In an uncannily prophetic letter to the London Times in 1863, he [Gamgee] not only predicted the importation of the cattle plague [to British shores], but that it would come from a Baltic port” (Smithcors, 1957, p. 387). Gamgee was a vocal proponent of "contagionism", the theory that diseases spread by contact under any given condition. Gamgee took his case to the people, and he campaigned for action from the British government as well as at the international level to control infectious diseases in livestock (Swabe, 1999, p. 97). Gamgee had opponents in the "anticontagionism" camp whose defenders believed that diseases erupted spontaneously when conditions were favourable. Strickland Constable was an opponent of contagionism and refuted Gamgee’s proposed methods for controlling infectious disease outbreaks - slaughter of infected animals and stopping animal traffic.

"John Gamgee was unquestionably the best-educated and most brilliant figure in British veterinary history to the late nineteenth century. His knowledge of disease pathology and his clinical experience were far superior to any of his contemporaries" (Fisher, 1991, p. 297).

Public health concerns that interested Gamgee included safety of meat. He concluded that far from diseased cattle being destroyed, infected meat was finding its way into the supply chain and being consumed by members of the public. There were concerns about links between human and animal tuberculosis: a 1911 report concluded that milk from infected cattle posed a risk for humans, less so for meat from infected cattle. Gamgee was also interested in storage and transportation of meat. By the end of the 1800s refrigeration and freezing methods had been developed, so that meat could be safely transported. In 1866 Gamgee left for America and for eight years worked on reports for the Department of Agriculture and the Chicago Pork Packer’s Association. His topics were cattle diseases, effects of transport on the quality of beef cattle, and improving refrigeration of meat (Wilkinson, 1992, p. 107). Meat inspection was carried out by government agents outside the veterinary profession. ”The one veterinarian after the death of Youatt who was qualified to cope with the problem [origin of epizootic diseases], but whose adequate grasp of the situation [cattle plagues in British livestock from 1840-1870] was completely ignored, was John Gamgee” (Smithcors, 1957, p. 383).

Gamgee founded the Edinburgh Veterinary Review as a vehicle for communicating his views on infectious diseases in cattle and how to reduce transmission by reducing the free trade of cattle into Britain. He also spoke out about the trade by farmers in infected meat, but veterinary researchers and inspector James Beart Simonds carried greater weight in his word and reputation. Simonds did not at first recognize the disease in infected animals and then delayed notifying the government. In a blow to the development of the veterinary profession, Smithcors (1957, p. 102) notes that the campaign against the cattle plague was handed over to the Medical Department of the Privy Council rather than allow the veterinary profession to lead the way.

”The one veterinarian after the death of Youatt who was qualified to cope with the problem [origin of epizootic diseases], but whose adequate grasp of the situation [cattle plagues in British livestock from 1840-1870] was completely ignored, was John Gamgee” (Smithcors, 1957, p. 383).

Gamgee's book, Dairy Stock: its Selection, Diseases, and Produce with a Description of the Brittany Breed, 1861 includes a history of plagues and notes about Gamgee’s experiences with infectious diseases. He wrote The Cattle Plague With Official Reports of the International Veterinary Congress in 1886: this work is not in the University of Saskatchewan collection, however the full text has been digitized by Google Books. Gamgee's understanding of control of infectious diseases influenced legislation in Britain and internationally. Gamgee proposed an international organization for the control of epizootics in 1863, but action was delayed by World War I. It was not until 1921 that the Office Internationale des Epizooties (OIE) was established after a severe foot-and-mouth epidemic occurred (Karasszon, 1988, p. 416). The OIE was renamed World Organisation for Animal Health in 2003. It is an intergovernmental organization coordinating, supporting and promoting animal disease control.

Gamgee wrote on the topic of animal health aimed at the educated stockowner or veterinarian. From the Preface Our Domestic Animals in Health and Disease "The success of the [British] stockowner, however, has been more due to his own industry and practical intelligence than to any advice or assistance he may have obtained from the current works on veterinary subjects, which, as a rule, do not embody the most recent information, and are far below the requisitions of the age" (Gamgee, 1867, p. v). Two of Gamgee's works on animal health are in the Rosen collection including Dairy Stock: its Selection, Diseases, and Produce with a Description of the Brittany Breed, 1861, and Our Domestic Animals in Health and Disease; Third Division Organs of Secretion: Urinary System, its Functions and Disorders; Cutaneous System, its Function and Disorders; Epizootic and Enzootic Maladies, 1863 in 2 volumes. He also co-wrote with James Law General and Descriptive Anatomy of the Domestic Animals, 1862, that is not found in the Rosen collection.

"The laws of health require to be known before ill-health or disease can be understood, …" Preface to Our Domestic Animals (Gamgee, 1867, p. vi )