The Rosen collection includes a number of print veterinary memorabilia advertising products distributed by Canadian practitioners or Canadian companies. These include: 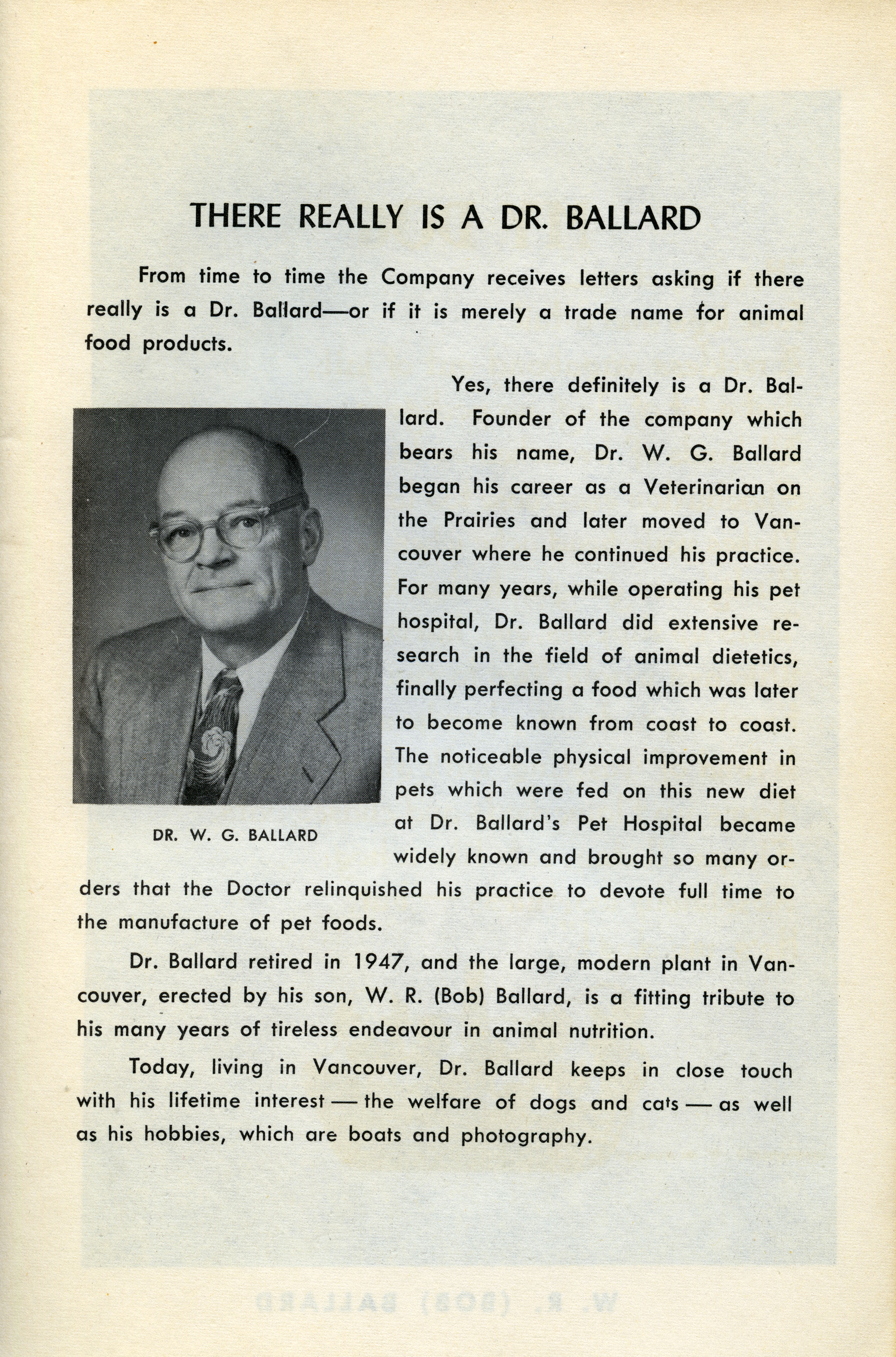 Dr. William Ballard was born in Toronto, Ontario, in 1914. In the course of researching animal dietetics in his veterinary practice, he developed a popular dog food formula that was in its first years mixed, packaged, and labelled by members of his family in the basement of their home. He developed the first canned (for easier distribution) pet food in Canada and later started a company called Dr. Ballard’s Animal Food Products Ltd. that was managed by his son. Dr. Ballard’s products had a loyal following and remained on store shelves from the 1950s until 2001.

Dr. Ballard’s Animal Food Products Ltd., 1953, produced For Your Pet, a 112-page paper booklet with advice for keeping your dog or cat happy and healthy.
Here are two images from that booklet, "There Really is a Dr. Ballard" and a centre spread advertising products. This advertising booklet highlights the personal connection that Dr. Ballard fostered with his pet owning clients. 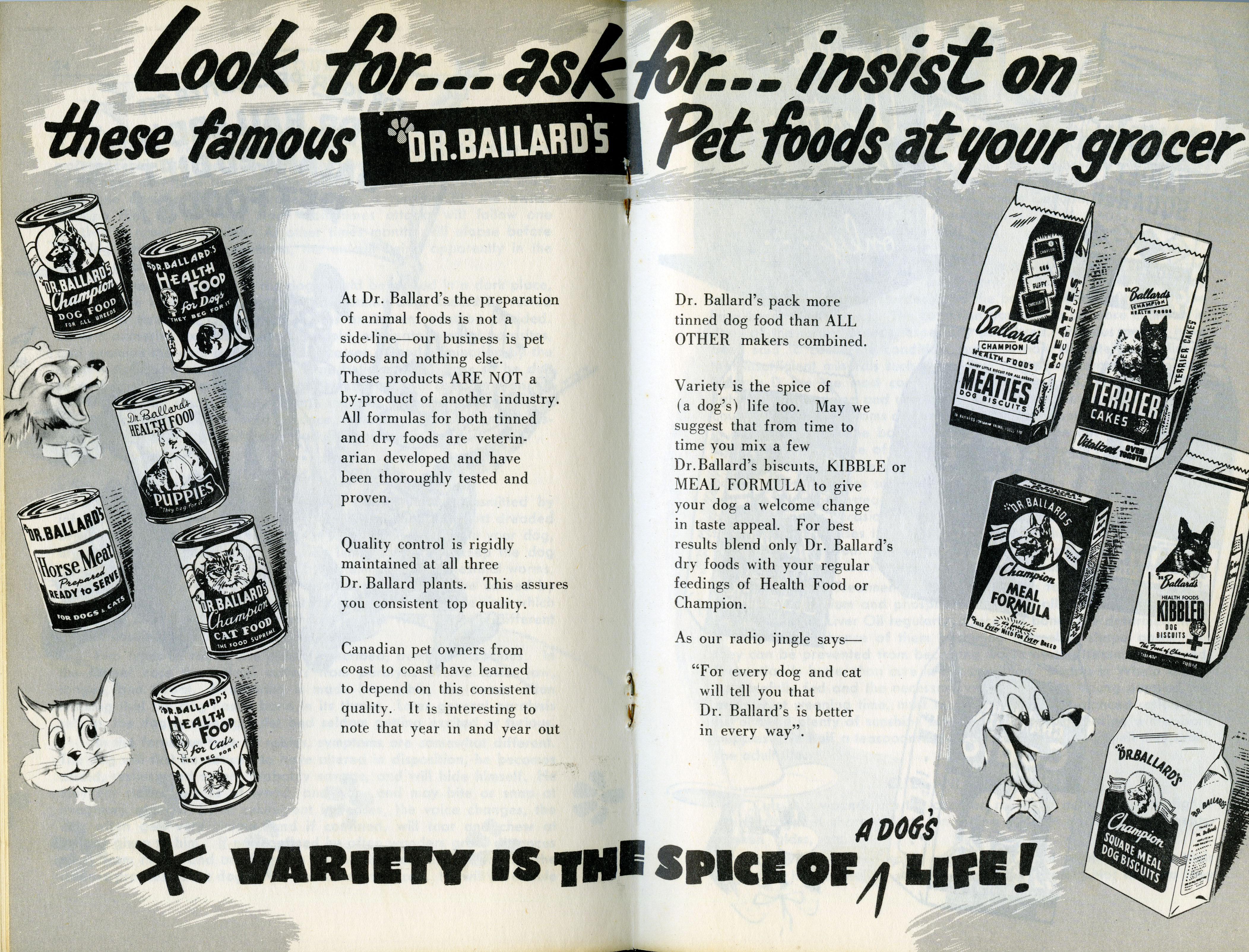 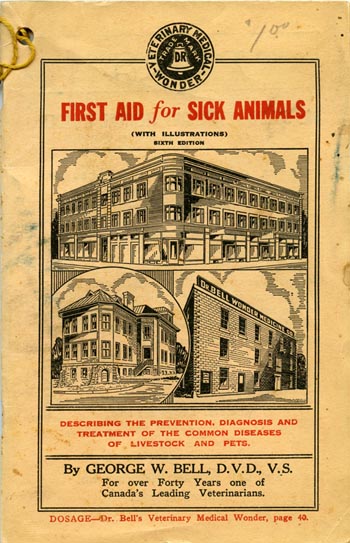 Dr. George Bell graduated from the Ontario Veterinary College, Canada, in 1880, and practised in the United States for several years before returning to Canada to open a practice in London, Ontario, in 1893. He was the proprietor of Dr. Bell Wonder Medicine Co. and manufactured patent medicines such as Dr. Bell’s Wonder Drops that were popular with old time farmers and ranchers. Dr. Bell reached his audience of equine owners by advertising in harness racing papers and sponsoring races in Ontario. Although Bell’s Wonder Medicine Co. (also known as Dr. Bell Wonder Medicine Co.) is defunct, its most successful product, Dr. Bell’s Wonder Drops, continues to be produced and sold in natural products outlets. Wonder Drops is an essential first aid medicine for owners of large animals sold in a generic form by a modern wellness company. With his brother Dr. Philip Bell, M.D., Dr. George Bell also developed a line of household remedies for human use.

First Aid for Sick Animals is a 64-page paper booklet, 1935, that is “... a synopsis of animal ills, their prevention and treatment...” with testimonials from clients and ads for patent medicines from Dr. Bell Wonder Medicine Co. The Rosen collection includes All About Your Dog Not Forgetting Your Cat, a paper booklet, 1920, with information for dog and cat owners on choosing a Dr. Bell’s product from Bell & Sons (Canada) Ltd. 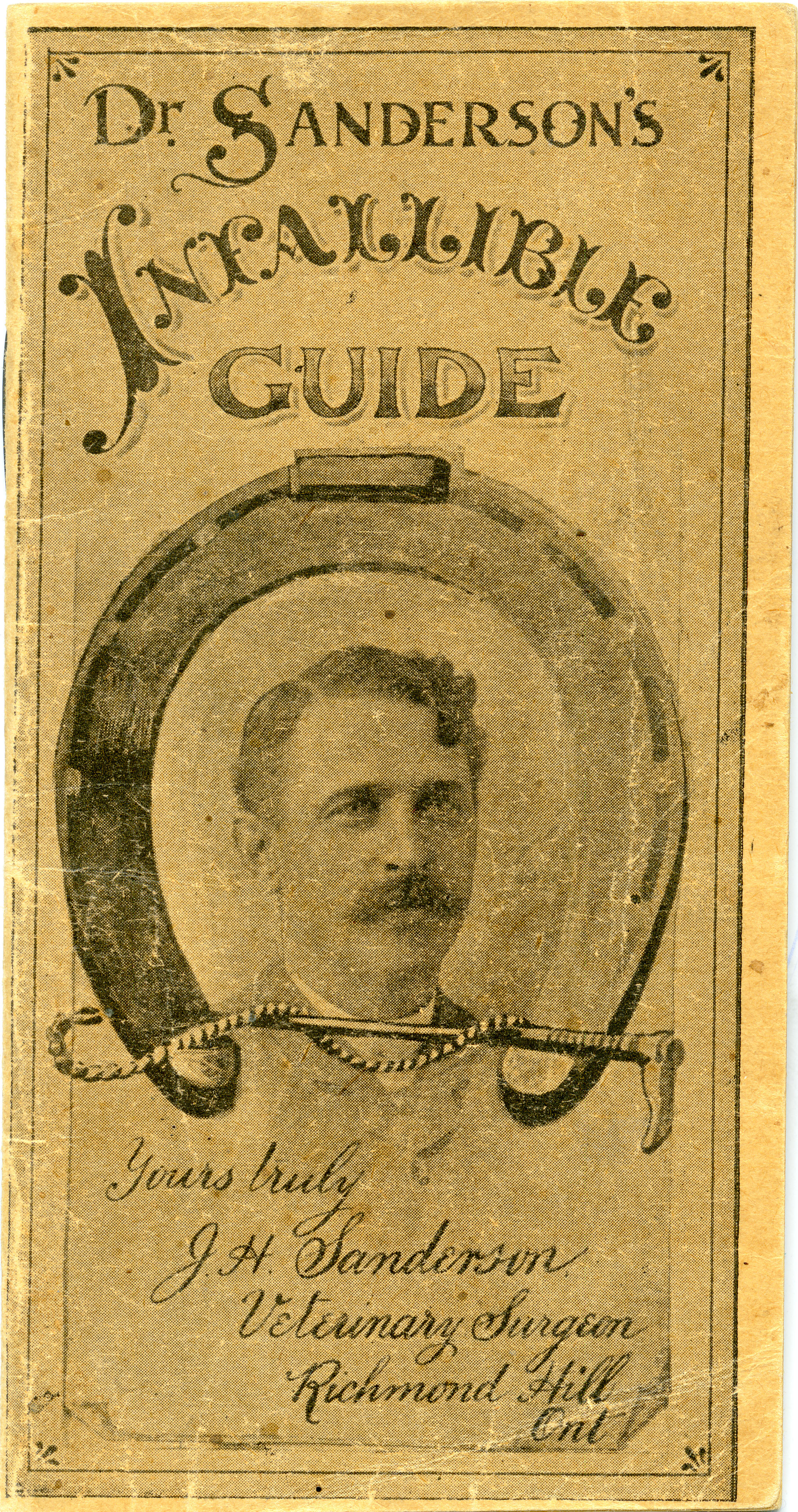 The Sanderson family had a pharmaceutical business in Richmond Hill, Ontario, from 1869-1918. J.H. Sanderson graduated from the Ontario Veterinary College in 1868 (the first class) and set up a practice to manufacture patent medicines. He was in business with his brother, William, who was a pharmacist. Together they sold patent and prescription medicines which was a common partnership at that time. They manufactured Sanderson’s Infallible Oil which was “... good for any condition of man and beast and could be taken internally or externally ...”. William was killed in World War I, leading to the demise of the company in 1918.

Dr. Sanderson's Infallible Guide is a pocket-sized booklet, 1927, listing common conditions in livestock, dogs and hens along with the appropriate doses of Sanderson’s products. The first half focusses on animal health; the second half on practical information dealing with human accidents and emergencies. Inside the Infallible Guide, Dr. Sanderson, the veterinary surgeon brother, offered advice to customers by return post "... on all diseases of horses and cattle...". 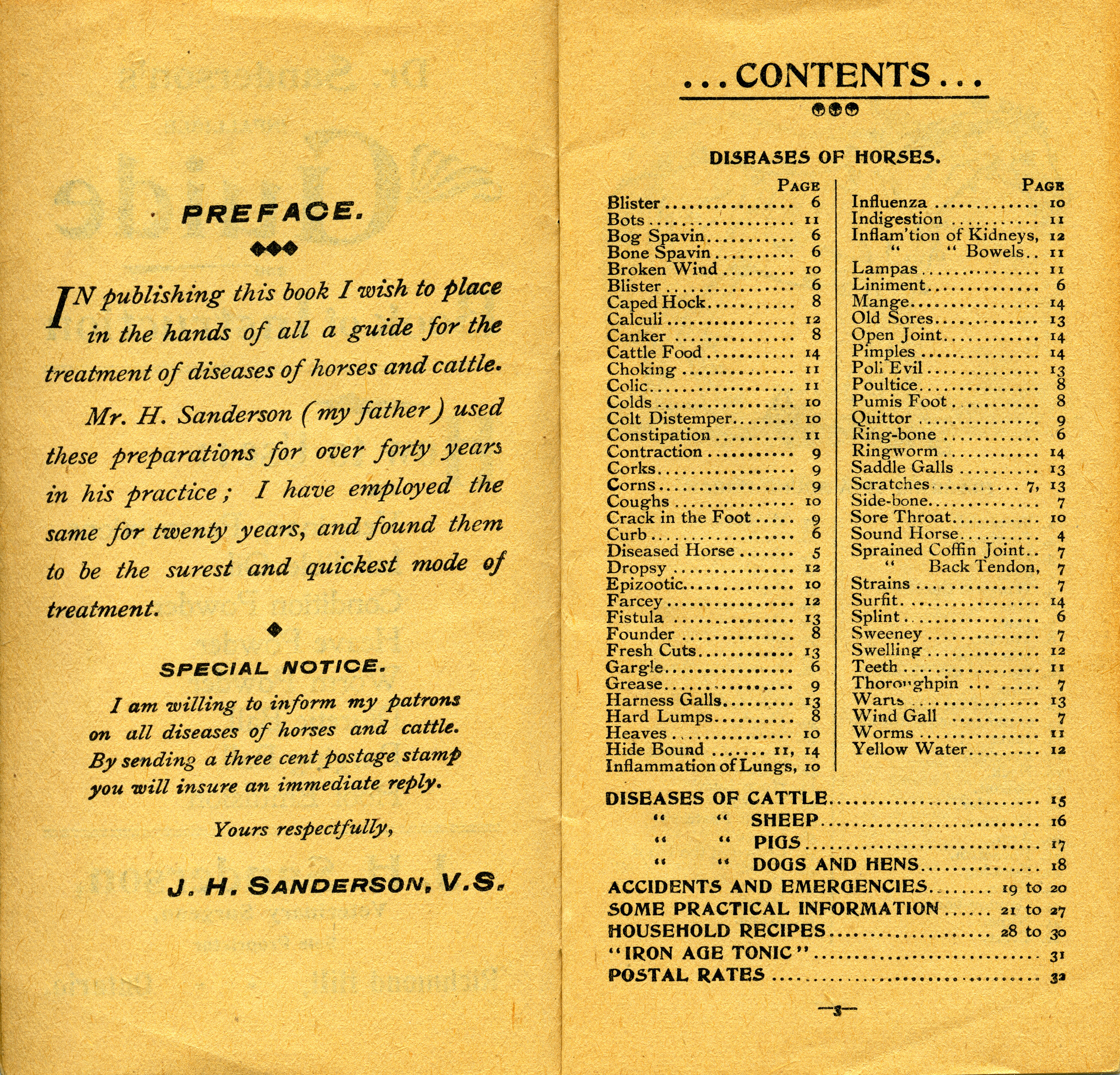 Although patent medicines were the first wave of products developed for the animal health care market they declined in popularity after legislative changes were first introduced in 1906 and followed by further amendments. Patent medicines were replaced as companies and individuals were forced to sell more regulated pharmaceuticals, livestock feeds, and veterinary supplies to animal owners. Companies offering regulated products included W.A. Jenkins Manufacturing Co., and Masterfeeds, the latter, a company that is still in business.

In Canada, W.A Jenkins Manufacturing Company, Limited, sold Royal Purple Stock Specific feed products for cattle and poultry. The privately owned company was incorporated in 1916 and operated out of London, Ontario, Canada. Royal Purple Stock and Poultry Specifics is an 80–page colour booklet from W.A. Jenkins Mfg. Co., 1913, with information on feed and other products available for cattle and poultry: it includes testimonials, recipes, and general information on the care of domestic animals. An image of the booklet is on the Website Introduction page.

Masterfeeds is a Canadian company and a leading feed manufacturer with an 87-year history. It became the largest livestock and poultry feed production company in western Canada after World War II. In 1928, Gordon C. Leitch established Toronto Elevators Limited at Queen’s Quay, Toronto, Ontario, to ship goods. In 1929, F. W. Presant, an agriculturist, was hired by Leitch to establish a commercial feed division and Masterfeeds was born. In 1937, the Master Research Farm began operations at Leitchcroft Farms, Thornhill, Ontario. The image displayed below is from a 108-page illustrated booklet from Master Feeds, no date, with detailed information on raising and feeding poultry; there is minimal advertising.

The Hackney Stock Food Co. Ltd. was established and incorporated in July 1906 with a head office in Winnipeg and an eastern branch in Toronto. The Hackney Veterinary Book, 1908 (image below) was used by the company to advertise its variety of products all prefixed with "Hackney" including: stock food; poultry food; louse powder; worm powder; condition powder; Gall cure; and colic cure. Some products may have been for human use including: Hackney healing oil; Hackney family salve, disinfectant and germ killer, and barb-wire liniment according to the newspaper The Voice, October 4, 1907.

Bart Cottam had a business in London, Ontario, as an Importer and Manufacturer of Grocer's Sundries. Among his products was bird seed. An complementary interest in caged birds led to a booklet entitled Cottam's New Illustrated Book on Caged Birds, 189?. He hired a young man named James Nicholson who later left to co-found Nicholson and Brock, a company that produced Brock's Bird Seed. Nicholson, later a millionaire businessman, left a bequest in his will to fund a national biography of prominent Canadians which became The Dictionary of Canadian Biography/ Dictionnaire biographique du Canada. ) 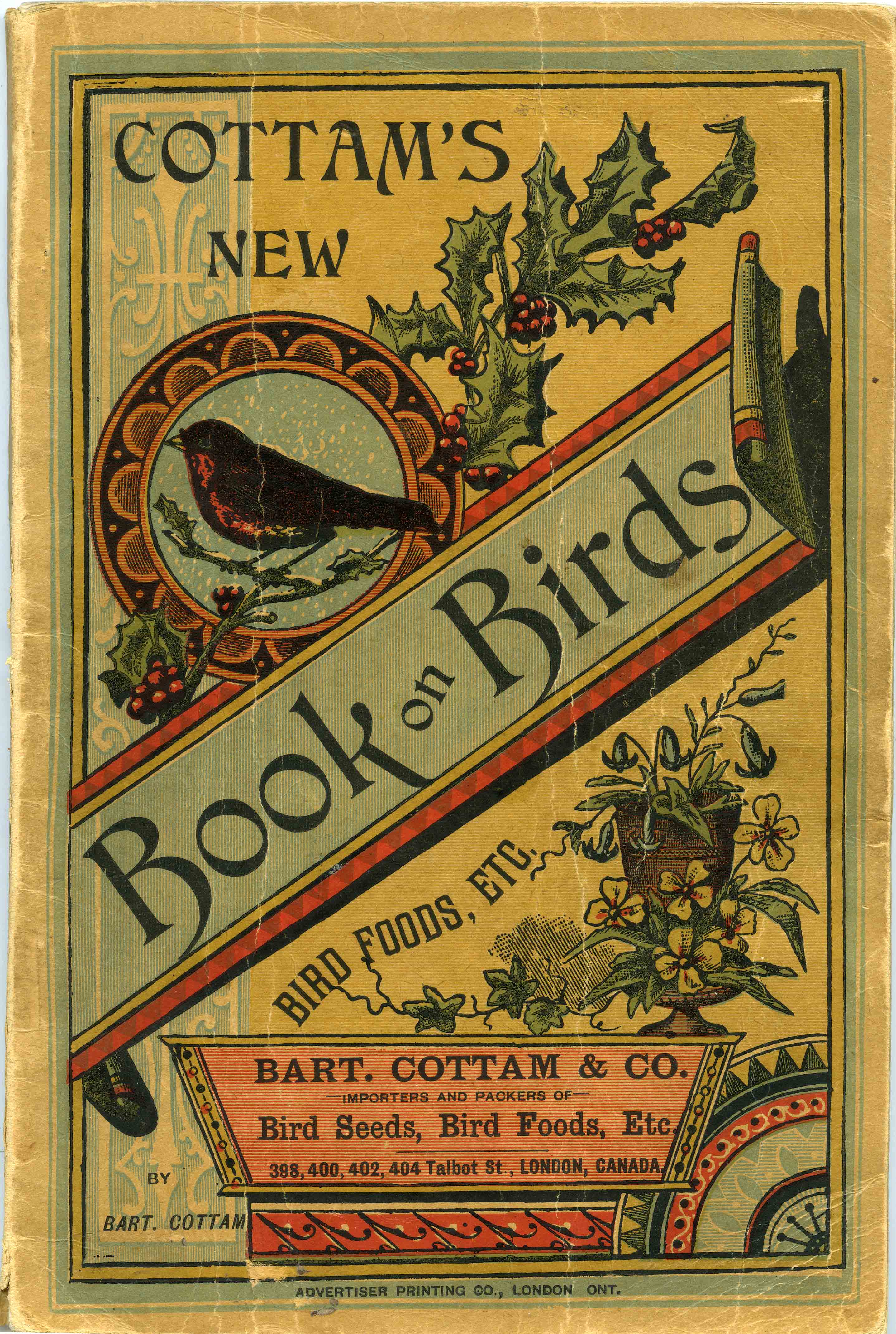 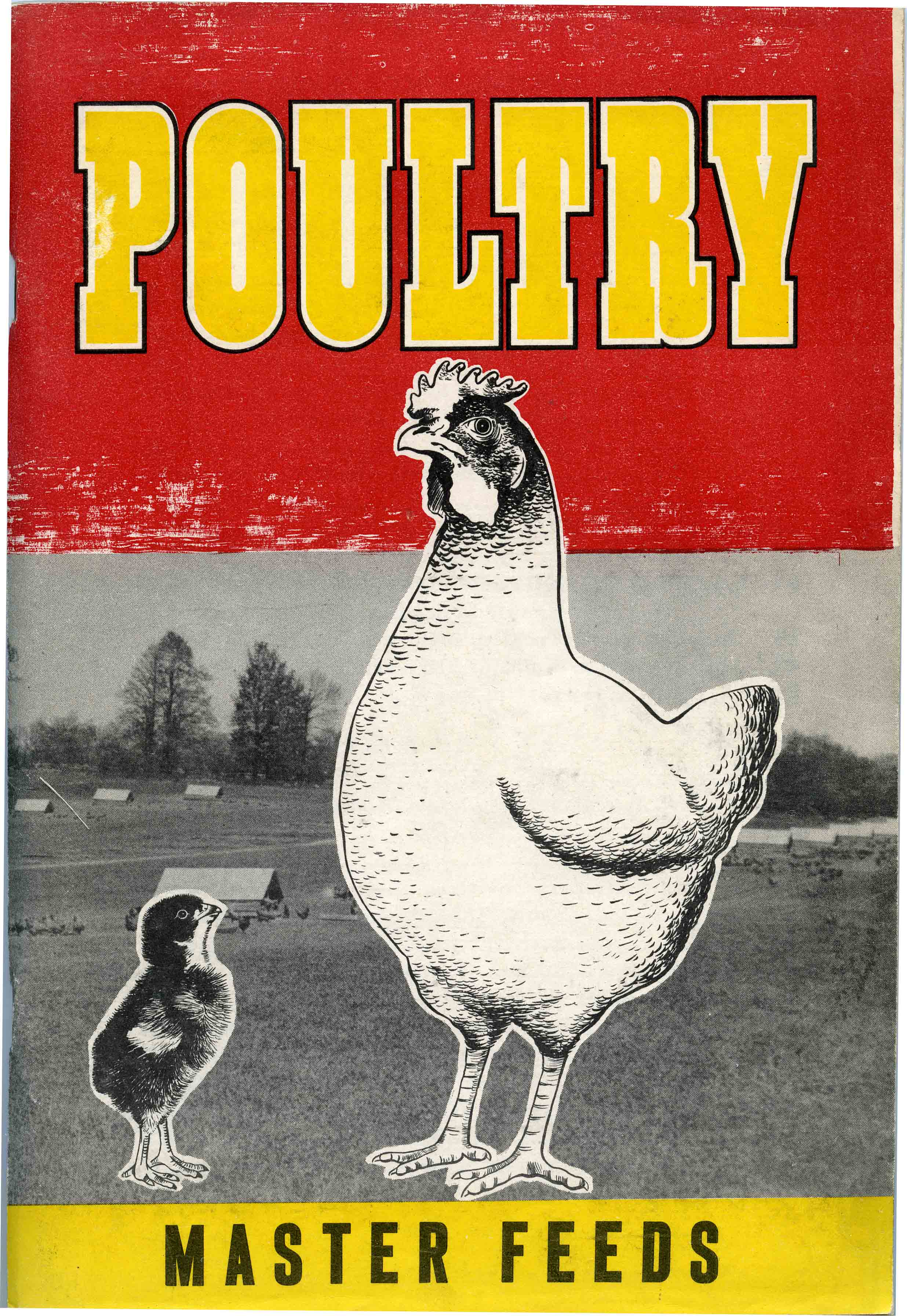