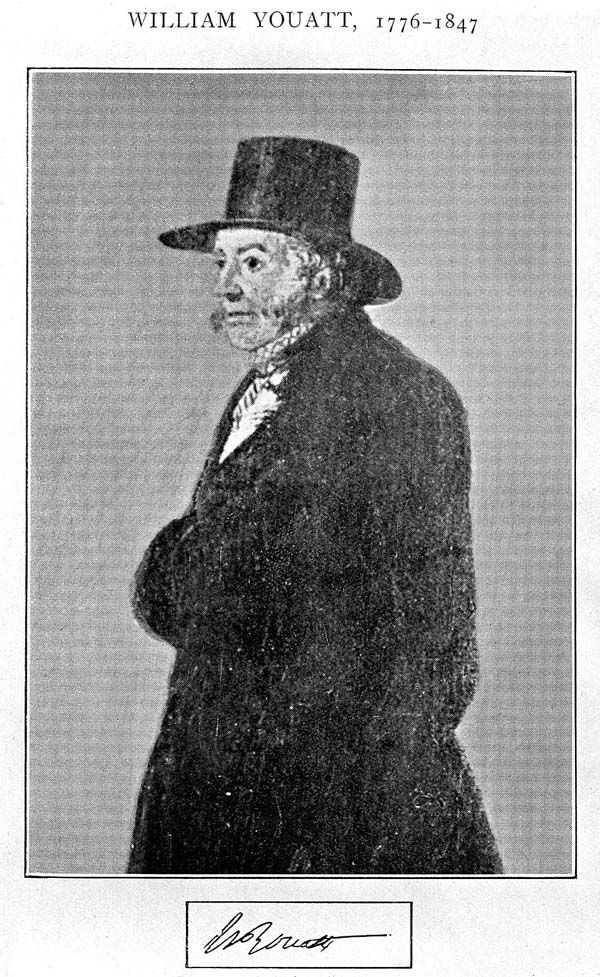 William Youatt (1776-1847) was a well-known contributor, in a variety of roles, to the evolution of veterinary medicine. He was a veterinary educator, science writer/publisher, and veterinary researcher. He loved animals and his interests in the veterinary profession were broad because “He was fundamentally an agriculturalist as well as a veterinarian” (Smithcors, 1957, p. 359). Youatt, a former Unitarian minister, joined the practice of Delabere Blaine in 1812 as a veterinary apprentice at the age of 37 years. His mentor advised him to avoid some of Blaine’s own professional woes by studying to graduate from the Royal Veterinary College (RVC). As a student Youatt had been discriminated against by the College’s Principal (Edward Coleman) because of his association with Blaine, however, Youatt did graduate just three years before his death in 1847.

William Youatt was an enthusiastic promoter of the veterinary profession who was well educated and able to express his opinions in a persuasive manner. Through experience gained in his veterinary practice and his interest in animal diseases and welfare, he became the country's leading expert on rabies. Youatt was also a well regarded author. He wrote a series of books on the major domestic species under the sponsorship of the Society for the Diffusion of Useful Knowledge: all titles are in the Rosen or University of Saskatchewan Veterinar Medicine Rare collections. His books were well received and raised the profile of the profession in British society. He also had a scholarly reputation in North America, “The profile of veterinary medicine to the general public was raised when the text from Youatt’s lectures on his work on horses, cattle, sheep, swine, horses and dogs was reprinted in the Farmer and Gardener [magazine] in the US” (Bierer, 1955, p. 33). Although Youatt was an active educator and valued his readers he was not above criticizing them for not putting their animals' welfare foremost. As summed up by William Yoautt (1834, p. 2) in Cattle; Their Breeds, Management, and Diseases, “There are two great sources of mortality of cattle and sheep, and the loss of agricultural property, and it is difficult to say which is the worst, - the ignorance and obstinacy of the servant and the cowleach, or the ignorance and supiness of the owner”. In addition to his writing and research, Youatt had the perfect platform for professional discourse as co-editor with William Percivall of The Veterinarian.

”The one veterinarian after the death of Youatt who was qualified to cope with the problem [origin of epizootic diseases], but whose adequate grasp of the situation [cattle plagues in British livestock from 1840-1870] was completely ignored, was John Gamgee” (Smithcors, 1957, p. 383).

William Youatt was one of the veterinary education 'reformers' intent upon exposing the poor quality of education offered by the London school. Similar to Blaine, he used the influence of the Royal Agricultural Society of England (RASE) to push the administration of the Royal Veterinary College (RVC) to include classes that addressed the diseases of all domestic animals, not just the horse. Youatt recommended his friend James Beart Simmonds to the RVC to fill an academic Chair in farm animal diseases. Youatt and Percivall used their influential veterinary journal to comment on Coleman’s management of the school, specifically, as well as the state of veterinary education in England, in general. They were respected veterinary practitioners, educators, and contributors to the veterinary literature in contrast to Coleman's poor reputation among his peers. Youatt, with the assistance of Percivall, provided lectures for students in physiology, anatomy, pathology and diseases of domestic animals, at the invitation of London University, a new, nondenominational, utilitarian institution directed toward professional improvement (Woods, 2017).

As summed up by William Youatt (1834, p. 2) in Cattle; Their Breeds, Management, and Diseases, “There are two great sources of mortality of cattle and sheep, and the loss of agricultural property, and it is difficult to say which is the worst, - the ignorance and obstinacy of the servant and the cowleach, or the ignorance and supiness of the owner”.

He edited the last edition of The Complete Grazier.

Posthumously published were:
• The Pig-a Treatise on the Breeds, Management, and Medical Treatment of Swine, with Instructions for Curing Hams and Bacon in 1847;
• and multiple editions of Youatt on the Structure and the Diseases of the Horse.